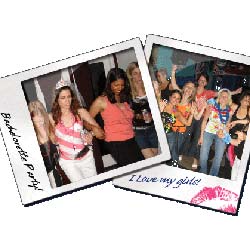 1. Loretta from GA had special penis-shaped bachelorette cakes ordered at her local bakery. This certainly had set the mood for her girlfriends even before they started enjoying shots and male entertainers arrived. The whole bachelorette party woke up the next morning with a major hangover.

2. Cindy from Florida shared her crazy bachelorette party stories that resulted not surprisingly from too much alcohol being consumed during the night. She awoke the following morning with a black eye without a clue on how she got it. Her make up artist had to really work to cover it up for the wedding that had bee scheduled one week following her bachelorette party.

3. According to Lauren from TX she hired a personal chef to cook her bachelorette party food. Apparently, the chef was not informed about oyster food allergies Lauren’s future mother-in-law had and she ended up in the emergency room instead of enjoying the party.

4. Brandi from Florida had to wear a leg cast for her wedding due to an accidental fall during her bachelorette party (helmii). She still regrets dancing on a bar table though she has some fun bachelorette party stories to share with her friends for years to come.

5. Kim from WI has perhaps has the wildest bachelorette party stories to share. According to her, her fiancé decided to crash her bachelorette party right at the time she was receiving her lap dance resulting in male entertainers fleeing the scene while girls were trying to contain the jealous fiancée throwing punches left and right at the hunks.

6. Jessica from Texas shares the saddest bachelorette party stories that actually were the reason for her to break up with her then fiancée. The bride to be and her girlfriends made a bad decision to check on the bachelor party a couple houses down. To no surprise they discovered her fiancée dancing with a topless dancer.

8. Liz from New York had the most uneventful beginning to her bachelorette party by being struck at the airport for 12 hours due to a major storm. After she had finally reached her hotel, her bridesmaids had been definitely celebrating without her judging by beer and champagne bottles being scattered all over their hotel room. In the end they had a round two bachelorette party with Liz this time and had a good time with good bachelorette party stories to tell.

9. Shannon from Florida shared her sad bachelorette party story that is really hard to believe. After their uneventful bar hopping night, three girls found their wallets missing from their purses. They still have now idea how it could have happened. The moral of the story is to watch your purses even while having fun.

10. Ashley planned a perfect Las Vegas bachelorette party that started out with taking stripping classes at Stripper 101 in Vegas. The bachelorette party was later taken to a local night club where the soon to be bride Ashley and two of her bridesmaids decided to try out their newly learnt sexy dancing tricks. It’s needless to say that they had to quickly leave the night club and return to their hotel room due to getting way to much attention from male bar visitors.

Prev Next
Leave A Reply
Cancel Reply
Stay With Us
Newsletter